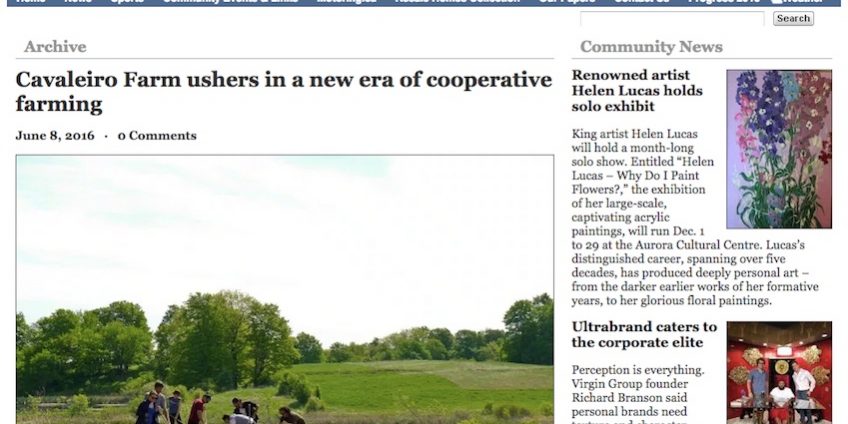 Our entire species is rooted in living off the land, and we can thank our forefathers for creating sustainable agricultural practices.

You’d be hard-pressed to find a truly natural farm operation, but public interest has generated a place for the ecological farm.
And such as a place exists in King Township.

Cavaleiro Farm is the brainchild of Urban Crops, an organization that brings together individuals and communities with a single motivation – to be the future of food production. While it sounds like a lofty goal, it’s really quite simple.

Individual and business members of this co-op style operation take a hands-on approach to growing food and animals, “cultivating minds” and thriving in a symbiotic, holistic relationship.

Led by Antonio Gomes, CEO of Urban Crops and manager of the farm on the 18th Sideroad, Cavaleiro Farm occupies its own niche. It follows the multi-farm Community-Supported Agriculture (CSA) model, a locally based economical model of agriculture and food distribution. Smaller farms that are closer to local markets and offer a wide variety of products, are taking on a life of their own.

The members, who come from across the GTA, may be restaurateurs, chefs, consumers or professionals, who support one another, work the land and share the risks. It’s more than just back to basics farming, it’s a co-operative culture of reaping what you sow.

Since 2009, UC has been designing and implementing food technologies and the 65-acre Cavaleiro Farms is its first real-world application.

When most of us think of “natural,” it’s really about getting less additives in our irradiated, genetically modified food. There’s nothing natural about it.

You have to see natural food systems in action to truly understand.

Cavaleiro is not a well groomed, modern agricultural facility. It’s not meant to be. It’s a functional operation, where everything lives in harmony and balance. From the ducks and turkeys wandering around and strutting their stuff, to the beds of callaloo and stands of paw paw, Cavaleiro has things you won’t find in any grocery store.

Every member, Gomes said, takes an active role on several projects. They all share resources. Wild plants thrive. When a tree is cut down, the branches serve several purposes, from trellises to firewood. At Cavaleiro, they’re working with nature, not against it.

It’s not just a producing farm, but a learning and teaching facility. They hold workshops and teach others how to grow their own crops. It can help members become entrepreneurs and open up new career paths. You can even “live the sheep experience.”

There are a range of motivations that lead people to the farm, not the least of which is reconnecting with nature.

Many put in long hours on the farm and it’s definitely a labour of love.

They’re also developing a unique breed of duck and all of the animals have a role to play in the operation.

Gomes pointed out that local farming is a challenge in that these small, independent operations are “unplugged” from the big food producing system. They have to create innovative ways to grow, process, market and sell.

But the hard work is paying dividends. In the past three years, Cavaleiro Farm is evolving and growing in popularity. They offer training and sell kits to prospective farmers. Gomes sees it as an opportunity to promote agri-tourism, something that’s part of King’s Sustainability Plan.

Gomes is seeing many new, young farmers who want to start, but the prohibitive land costs prevent them. Private landowners seek out his expertise with similar dreams.

The public has a unique opportunity to get a glimpse of Cavaleiro at their first Summer Solstice Sun & Fun Party. Join them on the longest day of the year, June 18. On tap will be many activities and tours so visitors can get a vibe of the place. An evening campfire awaits those who want to connect a little longer.

If interested, just show up at the farm that day, located at 6905 18 Sideroad, just west of Concession 11.